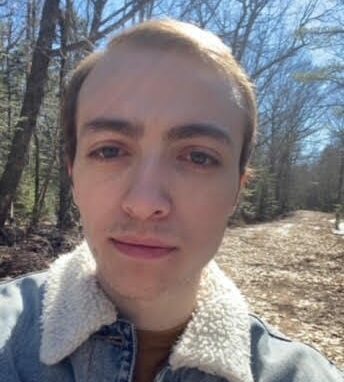 With a mechanical mind and dexterous hands, being planted in a classroom chair while staring at a textbook wasn’t working for Chase Huber ’19.

“By middle school I knew I didn’t want to go to college,” he says. “I wanted to do something in the building trades. My grades were poor so either I was going to have to drop out after eighth grade, change schools or not graduate.”

After a friend at Harpswell Coastal Academy (HCA) said he would love the school, Chase shadowed students for a day to learn more. “HCA just had this vibe,” he recalls. “Everyone was sitting around talking and it seemed like they all genuinely wanted to be there.”

Chase had already spent a few summers assisting his father — a commercial fishing boat mechanic — and hewed to the active, hands-on problem-solving involved. Once enrolled at HCA, he was able to attend a regional vocational school’s welding program in the mornings and spend afternoons on the HCA campus. Chase was chosen to be one of the few students piloting a composites program for the vocational school, where he learned about fiberglass and Computerized Numerical Control (CNC) manufacturing.

“HCA teachers recognize that not every student is suited for college,” he says. “They made sure I would have the necessary skills to be ready for the trades because that’s what I wanted to do.” His parents happily watched him flourish — so much so that his sister transferred there in her senior year.

“I have the school to thank for helping me get the first job I applied for after graduation,” says Chase. “I already had a resume because of Harpswell Coastal Academy and applied with a CNA operator who hired me on the spot, saying, ‘We’re not going to pass you up!’ ”

He even credits the high school that validated his vocational aspiration for the reason he now attends Southern Maine Community College. “I recently decided the most direct route to a higher-paying job would be a college degree in software engineering,” Chase explains. “And through HCA I learned not to hate learning, that it could happen in different ways. I had really struggled with math before, but teachers there do whatever they can to ensure you understand the material. My math teacher would relate it to a real-world problem so it wasn’t just imaginary numbers.”

The teachers were more like friends, he adds, and their life lessons were equally valuable: “At previous schools the teachers didn’t seem that passionate about what they were doing,” Chase recalls. “HCA faculty are really passionate about teaching, and they showed me the importance of doing a job that makes you happy.”