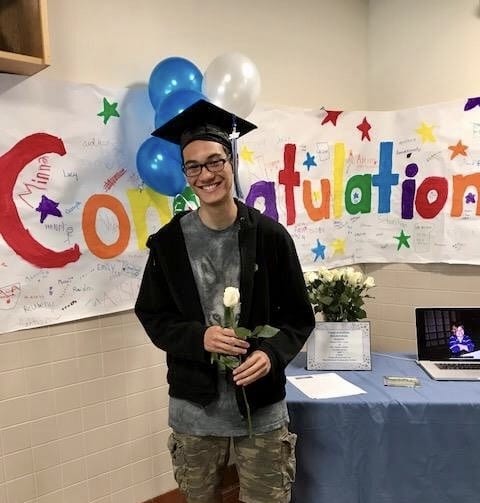 Ian was intimidated by the prospect of a mammoth high school with a gaggle of cliques. “I was exceptionally shy,” he explains. So when acquaintances talked up a new-ish charter school called Harpswell Coastal Academy (HCA), he was intrigued: “I’ve always been good at academics so it wasn’t that I thought, ‘This alternative will be easier, it was this will be more interesting!’ ”

As a freshman enrollee in 2013, a year after the school’s founding, part of HCA’s charm was that “it operated as an experiment as much as a school — and succeeded on both levels,” says Ian. Students were invested in shaping the school, from curricula input to organizing a parking lot prom. “I had a vision of what that school could be,” he says — as did the several other members of his graduating class. He describes it as an environment where students can excel greatly if they apply themselves, but fall miserably if they do nothing: “Your fate is in your hands.

“The HCA environment let me be more childish — in the best way possible,” he adds. “I could go from quietly reading a book in the corner to climbing a tree; there was a separation between work and play mode.” And as the antithesis to a clique-prone high school, there was “no stratification, no established structure of cool kids or nerds or jocks — everyone could be all of those things.”

He reveled in its project-based learning, such as measuring the pH of clam flats to evaluate how climate change erodes the population (higher pH equals weaker shells, meaning fewer clams mature). “I loved how we collected real scientific data,” Ian says. “Plus it tickled my marine biology side.”

For a humanities-based oral history project, he interviewed the owners of a seaweed-harvesting business — siblings reared without modern conveniences on Little Chebeague Island. Passions for history and martial arts merged in his senior capstone project, which delved into Japanese swords — their cultural meaning as well as molecular structure.

College was not in the plans until Ian experienced HCA’s dual enrollment program with Southern Maine Community College. “Going to college after HCA just sounded like more work,” he says. “But after taking SMCC classes as a junior and senior I thought, ‘If this is what college is like, this is pretty great!’ That first day I felt as if I didn’t belong in this room full of giants, but I’d already gone outside my comfort zone at HCA. I realized there was no reason that what I say should be considered dumb or wrong; I’m still shy, but now when I do talk, it’s with gusto!”

And now, four years after finishing Harpswell Coastal Academy, the English major will soon graduate from the University of Maine. A bakery job that doubles as an apprenticeship awaits, and past that it’s open sky. “Maybe I will open my own bakery or dojo (martial arts school),” says Ian. “And perhaps write a book!” Like the HCA ethos he described, Ian’s fate is in his hands.