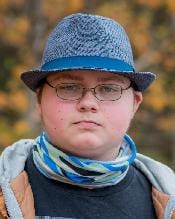 It can take a village to help a family emerge from the ashes of a house fire.

Fran Barry and her son Richard, a 10th-grader at Harpswell Coastal Academy (HCA), benefited from community support when their home was destroyed in 2019. After the local ReStore (a reuse store that sells discounted home improvement items and donated goods) operated by Habitat for Humanity/7 Rivers Maine provided affordable supplies, Fran and Richard expressed their gratitude by volunteering with the nonprofit. Once a week, Richard is onsite at the Topsham ReStore, cleaning donated items, moving them into the retail area, and loading them into customer vehicles.

“He does a lot of heavy lifting,” says Habitat’s Volunteer Coordinator Katie Lucie. She and the rest of the team were so impressed with Richard they named him their 2020 Youth Volunteer of the Year.

“He’s really a remarkable young man — very smart and a lot of fun to have around,” Lucie adds. “He has a knowledge of all things digital so I will be picking his brain for our (virtual) fundraising walk this spring. And when we resume homebuilding, I’m excited to introduce him to the community because I think they will also see him as a real asset.”

Known for his quiet humility, Richard would blush at the compliments his mother hears.

“Everyone (including customers) has told me how helpful he is,” says Fran Barry. “They are always surprised when they find out he’s only 15, which makes me very proud. Several volunteers have offered to give him work references; one volunteer told me that he was amazed by Richard’s willingness to do anything they ask of him.”

Richard is learning basic electrical wiring by getting items ready for sale, a skill handy for when he starts Habitat home builds. It also jump-starts his studies; he aspires to major in engineering at college. “Several volunteers have worked in engineering and electronics and the builds will help me better understand those concepts,” he says. “I’m looking forward to building houses for people who have been in similar circumstances to ours.”

And like a Phoenix rising, volunteering has changed Richard.  “I’ve seen him talking with people from all walks of life at the store,” says Fran. “He’s become much better at interacting with people. He’s also grown more confident and even changed his focus from culinary arts to engineering because of the Habitat experience.”